After 36 years, Moses Xavier finally returned to Timor-Leste. Choking with tears of emotion, he hugged tightly almost everyone who greeted him. He was particularly moved to see his sister, immediately asking about her leg that was injured by a bomb during the past conflict in East Timor. “We can live again,” Moses reflected, “To see and step on the earth of our homeland.”

From 3-8 December 2018, AJAR and members of the bilateral Stolen Children Working Group facilitated the reunion of nine “stolen children” with their families in Timor-Leste.* These children, now adults, were forcibly removed from their families and taken to Indonesia, mostly by Indonesian military, religious, and charitable organisations, during the past conflict.

Since 2013, AJAR has been reuniting “stolen children” with their families in Timor-Leste. AJAR Timor-Leste’s Director, José Luís de Oliveira, explains: “This reunion is the result of the long pursuit of finding stolen children in Indonesia and their families in Timor-Leste. This is the manifestation of our hope. The Governments of Indonesia and Timor-Leste must fully support this effort led by civil society and implement the recommendations of the Commission of Truth and Friendship (CTF) in 2008, particularly in establishing the Commission of the Disappeared Persons to fulfill the stolen children’s rights to truth.” 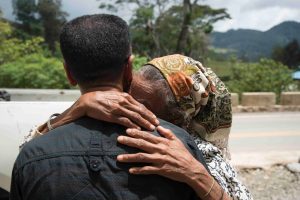 Representatives of these two governments joined in welcoming these stolen children at the office of Centro Nacional Chega! (CNC), the body mandated to implement recommendations of Timor-Leste’s former truth commission (CAVR). CNC’s Director, Hugo Fernandez, stated, “This is a historical moment…The CNC is obligated to trace separated East Timorese children and reunite them with their families.” The Minister Counsellor of the Indonesian Embassy in Timor-Leste, Widoratno Rahendra Djaya, further emphasised, “This is a human rights effort, not a political one. As neighboring countries, we must make a concerted effort…to maintain good relations.”

As Timor-Leste approaches the 20th anniversary of the 1999 referendum, it is urgent for the Governments of Indonesia and Timor-Leste to take more concrete action to address past human rights violations and to express their clear commitment to prevent their recurrence. AJAR and partners call on the two governments to implement the recommendations of previous truth commissions, CAVR and CTF, related to the situation of the stolen children. These include:

* Established in 2015, the Stolen Children Working Group has now identified more than 100 stolen children and facilitated six reunions, including this one, for 66 stolen children and their families. Members of the Working Group include in Indonesia: The Commission for the Disappeared and Victims of Violence (KontraS), KontraS Sulawesi, KontraS Surabaya, Association of the Families of the Disappeared in Indonesia (IKOHI), Labarik Lakon-Sulawesi in Indonesia; and in Timor-Leste: Asosiasaun Chega! ba ita (ACbit), Asosiasaun HAK, Fundasaun Alola, Timor-Leste Red Cross (CVTL), and the International Committee of the Red Cross in Timor-Leste (ICRC-TL). The Working Group works closely with Indonesia’s Commission for Human Rights (Komnas HAM), Timor-Leste’s Ombudsman (PDHJ), and Centro Nacional Chega! (CNC).