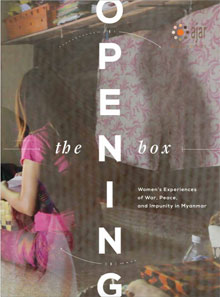 Opening the Box: Women’s Experiences of War, Peace, and Impunity in Myanmar

This booklet captures the stories of 29 women from Myanmar – former political prisoners from Yangon, and ethnic women from the conflict zones of Karen and Kachin State. It is based on our research with a total of 140 women victims in Indonesia, Timor-Leste, and Myanmar using participatory tools. The booklet presents the key findings of our […] Read more

Surviving on Their Own: Women’s Experiences of War, Peace and Impunity

AJAR conducted a participatory action research on how women experience conflict, and in its aftermath, struggle to survive in situations where impunity is the norm. These books of photos capture some of the initial results in Indonesia, Myanmar and Timor-Leste, using in-depth discussions and exchanges with 140 women victims and survivors. The Indonesian and Tetun […] Read more

For a quarter century, the people of Aceh and East Timor experienced massive human rights violations at the hands of the same Indonesian military, police, and intelligence institutions. The fall of President Suharto in 1998 brought change to the two conflict zones leading to independence for the new nation of Timor-Leste, and an eventual end to the war in Aceh, which remained within Indonesia but with greater autonomy. Read more