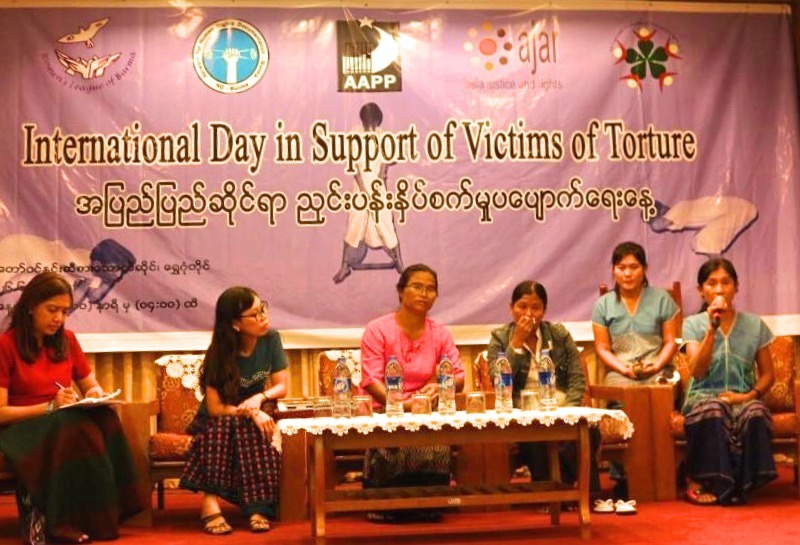 On June 26 2017, AJAR held a joint event to commemorate the International Day in Support of Victims of Torture in Yangon, Myanmar. Along with the Vimutti Women’s Organization (VWO), the Network of Human Rights Documentation (ND-Burma), the Women’s League of Burma (WLB) and the Assistance Association for Political Prisoners (AAPP), AJAR hosted a panel and incorporated the arts to highlight the stories of torture survivors and the impacts of torture on survivors and their families. This event also explored the possibilities for truth and justice on a national scale, starting with the launching of the official Burmese translation of the Convention Against Torture and Other Cruel, Inhuman, or Degrading Treatment or Punishment, and calling for the government to end torture practices, legislate the convention, and incorporate the needs of torture survivors in the peace process.

This commemoration event drew over 200 participants as well as a high level of media coverage. To extend its impacts, AJAR also supported two additional events in Bogelay, Ayeyarwaddy Division and Monywa, Sagaing Division, marking the first events hosted outside of Yangon. The event centered the stories and experiences of torture survivors, particularly those of women at the hands of Burmese state authorities. Lway Poe Ngeal, WLB Secretary-General, highlighted the gendered dimensions of torture, in which rape and sexual violence have been used as tools of torture against Myanmar women, particularly in ethnic areas. Daw Su, a Village Head from Karen State, shared her experiences of torture from the military. Ze Nyoi, who currently resides at an IDP (internally displaced persons) camp in Myitkyina, revealed her husband’s experiences of torture while detained in 2012, as well as her struggles in advocating for his release while providing for their family. Daw Htwe Sein and Daw Than Than Htay told their stories of torture during their imprisonment for their human rights and political activism. All of them shared the harrowing effects of torture long after it has happened.

To build on the powerful stories of the torture survivors, AAPP performed a dramatic role-play to depict the arrest and torture of student activists and illustrate the effect of torture on survivors’ families. Moreover, the role-play portrayed a future where political prisoners and other torture survivors give testimony to a national Truth Commission. The event reminded the audience that torture is not a practice of the past; it continues to be used in Myanmar by state and non-state actors at an alarming rate. To date, the Convention Against Torture has not been signed by the Myanmar government. The panel speakers encouraged other survivors of torture to speak out and called for the government to pursue justice by fulfilling victims’ rights for reparations and support in the forms of psychosocial assistance, vocational training, and public acknowledgement. U Than Naing Oo, a parliament member from Yangon, was also present as a panel speaker and showed his support for the ratification of the Convention Against Torture and commitment to work with civil society organisations to end the practice of torture.

To learn more about the issue of torture in Myanmar and ways to build a survivors’ movement, please see this joint release.