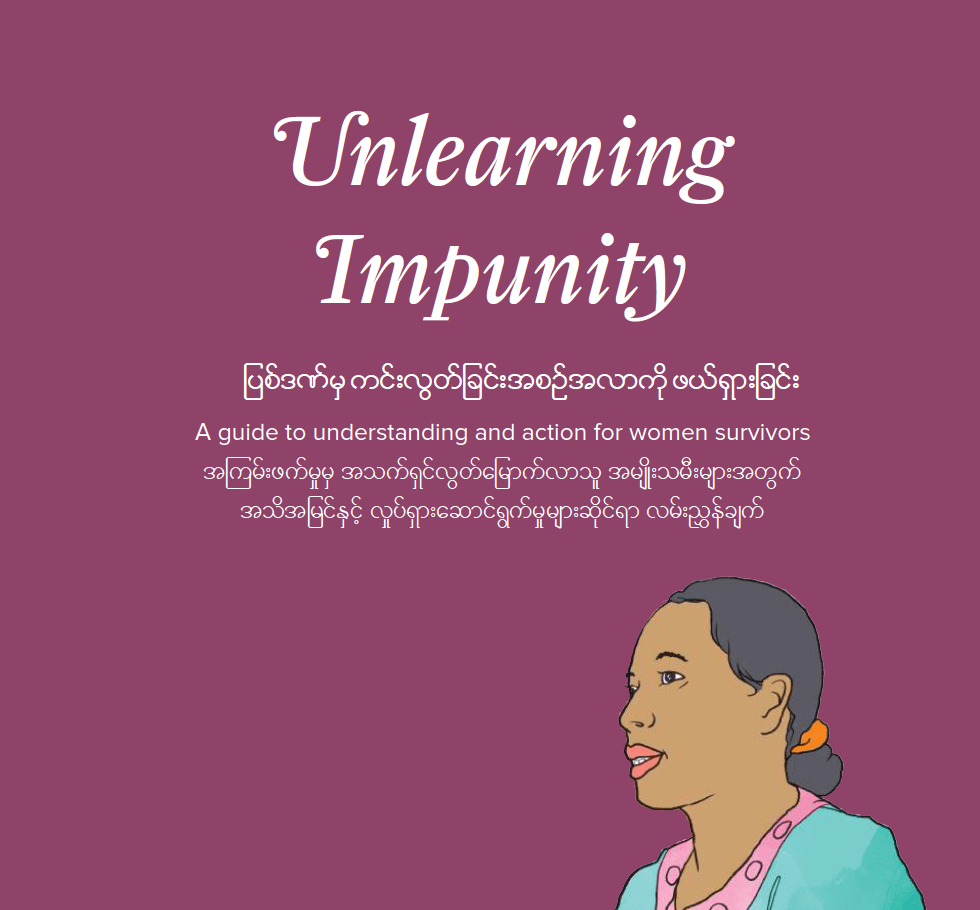 On the eve of the International Day for the Elimination of Violence Against Women, Asia Justice and Rights (AJAR) launches its manual “Unlearning Impunity: A Guide to Understanding and Action for Women Survivors” in Myanmar.

This manual is a companion book of AJAR’s series of final reports on gender justice research. Since 2013, AJAR and its partners initiated participatory action research projects in Indonesia, Timor-Leste, and Myanmar to strengthen women survivors of violence in post-conflict transitions. The manual explains a variety of methods we used to document women’s stories, which include community-based healing methods and ways to develop advocacy initiatives at a local level. Recognizing that women who have endured gross human rights violations seldom have the time or a place in which to talk about their experiences and to heal, we created safe spaces for women victims/survivors to gather and share their experiences of violence and impunity.

We know that impunity perpetuates silence about violence; ignores past and present trauma and poverty; and refuses to demand accountability from perpetrators, both institutional and individual. Perpetrators still have social, economic, and political power. In this way, impunity maintains cycles of violence against women through cultural and religious norms.

This manual offers a process that encourages women who have survived violence to “unlearn” those norms and resist the many ways used to maintain impunity. The participatory tools and ideas behind them move us in the direction of greater balance between individual and community experiences, between attention to civil-political and economic-social rights, and between women’s experiences of violence during and after conflict. We also seek to balance attention given to healing, empowerment, and advocacy at both individual and community levels.

Galuh Wandita, AJAR’s Director and co-author of the book, said: “This manual speaks to AJAR’s conviction that the struggle against impunity must be a process accessible to victims  and stakeholders of justice at the community level.”

This process, designed to help women unlearn impunity, provides space for women who have experienced great loss, suffering, and violence to create new responses to injustice. This manual, therefore, is written for those who will facilitate the learning process— activists, practitioners, and popular educators who have experience working with victims’ organizations and civil society groups in the struggle to resist impunity.

In Myanmar, these tools have already been used by 80 women survivors from various ethnic backgrounds, including Kachin, Karen, Ta’ang and Burmese, victims of conflict-related violations or other forms of state violence, including former political prisoners. 14 local activists and/or survivors from 6 women’s organizations have been trained and have used these tools in their communities: Kachin Women Association Thailand (KWAT), Women Organization Network (WON), Karen Women Empowerment Group (KWEG), Karen Women Organization (KWO), Ta’ang Women Organization (TWO) and Wimutti Volunteer Group (WVG). AJAR and its partners are planning to extend the use of these tools to more groups in the future.

An electronic version of the manual can be found online at:

AJAR (Asia Justice and Rights) is a regional human rights organization based in Jakarta. AJAR works to increase the capacity of local and national organization in the fight against entrenched impunity and to contribute to building cultures based on accountability, justice and a willingness to learn from the root causes of mass human rights violations in Asia Pacific region.