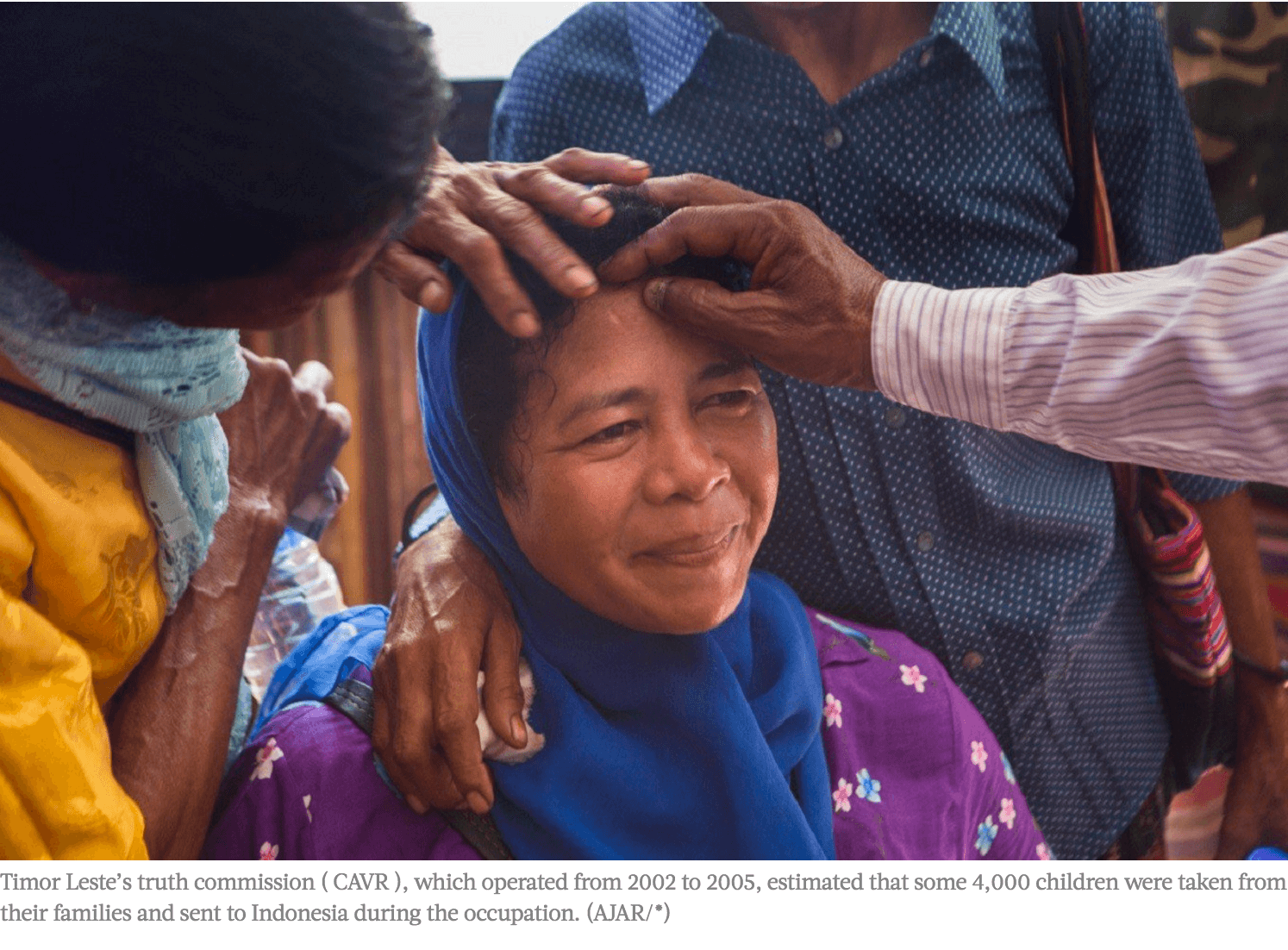 “See this scar? I did that!” Peals of laughter and bright smiles erupt as Rosa’s brother touches her forehead gently, brushing an almost invisible scar. He reaches for her earlobe, “Our mother made that earring hole in her ear; she cried.”

Rosa is surrounded by two siblings, her older sister and brother who are both in their 50s. They cannot stop holding her, caressing her cheeks and hair, after 38 years of separation. Across the room, 10 other families are each inside a cocoon of love.

In 1978, during the height of the war in Timor Leste, Rosa and another sister were separated from their family. The two lost girls found their way to Aileu, a little town nestled in a fertile valley about two hours away from their village in Railaco.

A soldier found them and said he would take the smaller girl.

Rosa’s sister tried to stop him, but Rosa was taken to a military camp. After two nights there, she boarded a military truck to Dili, then a ship to Makassar.

The promise of an education was never met. She ran away from the family that took her in numerous times, but was taken back. She worked hard on their farm. Now she is married with four children. “I cannot talk about my suffering then,” she said.

Timor Leste’s truth commission ( CAVR ), which operated from 2002 to 2005, estimated that some 4,000 children were taken from their families and sent to Indonesia during the occupation.

The transfer of children was a practice sanctioned by the military and civilian authorities, involving individuals and later on military and religious institutions that facilitated this process. The CAVR made this finding: “The struggle for control of Timor Leste was partly played out in the battle for its children. Children became victims, perpetrators, assistants and observers in the political conflicts that engulfed Timor Leste from 1974.

“The obligation of all parties to put the best interests of children first was widely ignored.” The CAVR also made strong recommendations on finding and reuniting children separated during the conflict.

With the passing of time, these children became adults. Many have adapted to the culture, language and religion of the places they found themselves in.

Although bearing new names, they still remember their East Timorese identities, scraps of memories from their childhood: a mountain view, the name of their village, the name of their parents, a lullaby. In Indonesia, few were lucky enough to be cared for by loving families, raised and educated as Indonesians.

However, many of these children were vulnerable to abuse, exploitation and neglect. The majority did not have the opportunity to go to school and had to work hard to survive on their own.

Most importantly, some of them were not orphans and continued to be sought by their family members. The Commission for Truth and Friendship of Indonesia and Timor Leste ( CTF ), established by the two governments and run from 2005 to 2008, also made a recommendation on the issue of the separated children.

Since the submission of the CTF report to the two presidents in 2008, negotiations have continued over how to implement the recommendations.

In July 2009, Timor Leste submitted a short proposal to Indonesia to consider the establishment of a subworking group related to the issue of missing persons, including separated children, but Indonesia continues to be a reluctant party.

In October 2011, the Indonesian government issued a presidential decree for the implementation of the CTF recommendations.

However, many years later there has been little progress in this area on the part of the two governments.

The “stolen children” of Timor Leste are not the only pressing issue for Indonesia to deal with that comes from its violent past. However, it is one that in the short term can bring joy to everyone involved in this effort.

The longing of these stolen children to be reunited with their families and vice versa is a universal story that reverberates in all of us.

The Indonesian government should take concrete steps to facilitate these reunions, working closely with civil societies, Komnas HAM and others who have been working hard to bring about this breakthrough. In our decades-long struggle to deal with the legacy of gross human rights violations, here is an opportunity to provide redress to victims who were only children at the time of the violation.

An official truth-seeking process can help us understand the magnitude of the violations that took place during the New Order. If we do so, we can feel proud that we, as a nation, are strong enough to right a wrong from our past.