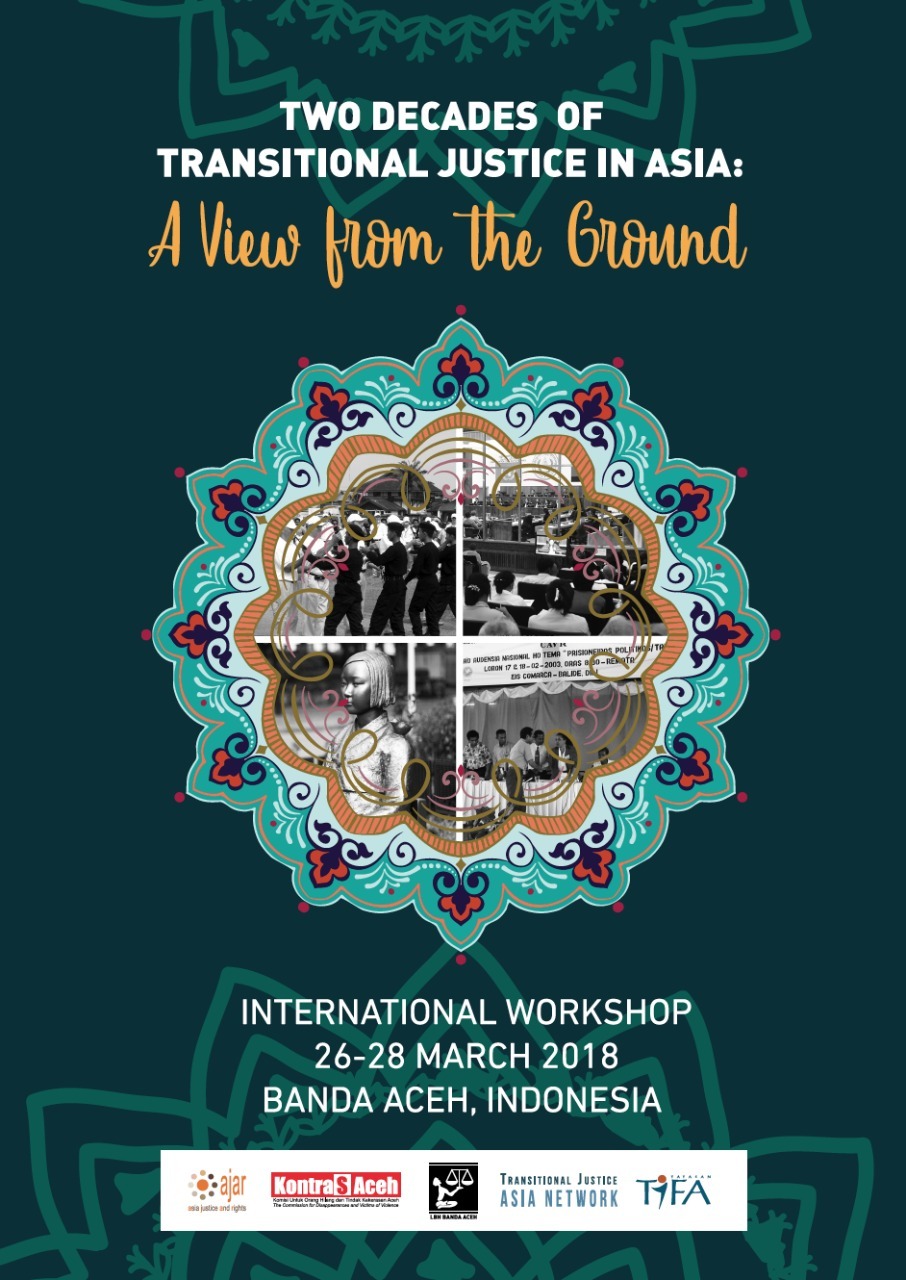 Regional Roundtable Discussion on “Two Decades of Transitional Justice in Asia: A View from the Ground” in Banda Aceh, Indonesia

On 26-28 March 2018, thirty practitioners, academics, and commissioners of transitional justice and truth commissions from the Philippines, Thailand, Sri Lanka, Nepal, Cambodia, Bangladesh, Myanmar, Timor-Leste, and Indonesia gathered as part of the Transitional Justice Asia Network (TJAN) to share experiences and to draw key lessons from two decades of transitional justice in Asia. Participants also learned about the role of truth-seeking efforts as a means to preserve peace in the context of Aceh, an Indonesian province which has recently established a Truth and Reconciliation Commission to address human rights violations from the past conflict. Participants also visited the Aceh Peace Memorial Hall and discussed peace and democracy issues with Bahtiar Abdullah, former Free Aceh Movement (GAM) negotiator, and Munawarliza Zainal, former member of the GAM negotiation team at the Aceh Governor’s official residence.

During the past two decades the field of transitional justice (TJ) has developed into a worldwide movement, providing important, but partial and imperfect answers to the question of what should be done about mass violations in order to achieve justice, sustainable peace and prosperity. Impunity and a lack of accountability for crimes committed by the elites and security forces are the norm across the Asia region, making the kinds of TJ interventions that have taken place in Latin America and Europe difficult to achieve. Historical divisions, the legacy of colonial administrations, widespread corruption and grand theft of natural resources by dictators and unaccountable governments have fueled ongoing cycles of violence in many countries in the region.

Asian nations have drawn from international experience in establishing a range of transitional justice mechanisms including courts, truth commissions, institutional reform initiatives and some limited forms of reparations programs. Dismantling the systems of cronyism, corruption and impunity that are prime factors enabling and often motivating mass human rights violations cannot be expected to take place quickly. However improvements are possible through a step-by-step approach utilizing strategic TJ interventions and tools.

In recent years hybrid courts with mandates to try international crimes have been established in Timor-Leste and Cambodia. Domestic courts have been established to try perpetrators of mass crimes in Bangladesh and Indonesia. Peace processes have led to the establishment of truth and reconciliation commissions in Timor-Leste, Thailand, South Korea, Nepal and most recently Aceh, Indonesia.

In addition, a number of innovative approaches in the region provide interesting examples and lessons learned. These include:

There are also examples of initiatives that have contributed to repairing the lives of victims. Among these are Japan’s system of using privatized funds in the form of “citizen donations” to provide compensation for victims of war-time sexual slavery, government compensation for a relatively small number of civilians affected by conflict in South Thailand, payment of millions of dollars in the form of the Islamic ‘diyat’ to victims in Aceh, a limited reparations system for victims of the Maoist-government conflict Nepal, and compensation from the Netherlands government for victims of a massacre by Dutch soldiers during the colonial occupation of Indonesia by the Dutch East Indies Company. There are also civil society initiatives in building memorials, such as the establishment of the Liberation War Museum in Bangladesh.

Many Asian contexts are facing complex challenges in which members of the elite implicated in mass violations before a transition to democracy are creating new powerful roles for themselves in government and business, wearing different clothes but their old friends and using similar methodologies. In Asia, there are increasing numbers of countries adopting transitional justice mechanisms. Drawing from several experiences of transitional justice elsewhere, there is a discussion to examine the limit of transitional justice that lies under the identity challenges, violent extremism, poverty, environmental etc. It is agreed that civil society across Asia has undertaken various initiatives to deal with accountability issues under transitional justice frameworks. They have also influenced various policies to deal with accountability in their countries.